Multi-touch technology is becoming more common place in both industrial and casual computing. With this rise in use developers are producing a wider range of multi-touch interfaces, each with different elements in their design. One element that most have in common is the shape of the display.

However, with the growing desire for non-rectangular displays to facilitate ubiquitous computing it is becoming apparent that multi-touch systems will need to support a range of display shapes. Several technologies already exist which can facilitate this. Other display technologies can easily be adapted to different display shapes as well.

However most software is currently designed assuming a rectangular visual output. This results in the developed software being reliant on a particular display shapes. This work focused on finding ways of adapting software to be able to adapt its visual content to any display shape.

It was discovered that when software which was dependant on a rectangular visual output were used with a non-rectangular display, occlusion of regions of the output occurred. This occlusion resulted in visual information becoming lost and software becoming unusable.

The method which returned the best results was discovered to be a combination of two methods. First the virtual rectangle method is used to resolve occlusion. Then for content items to which layout is not important (in multi-touch systems these items are normally those which users can manipulate directly through gestures) their initial layout is stretched. This pulls these content items out of the virtual rectangle into previously unused areas of the display. This maximises the initial use of the display’s real estate. 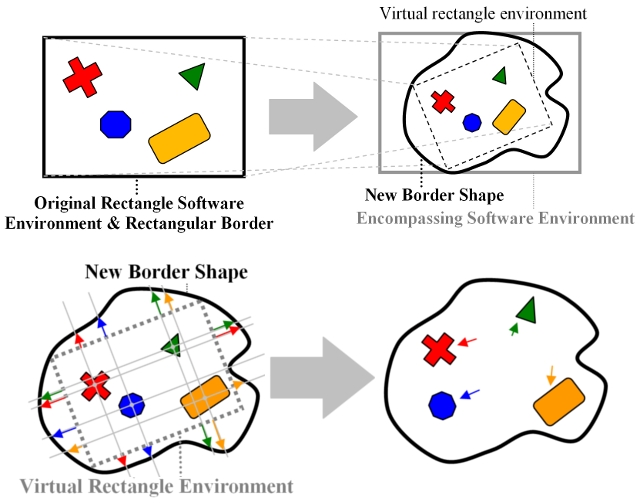 A technique for adapting content to a non-rectangular display

These methods of resolving occlusion from different display shapes was implemented into the SynergyNet framework. With the methods implemented at a framework level, any applications supported by the software became capable of utilising different shaped displays. Footage captured from the software during the evaluation of the methods can be seen in the following videos: